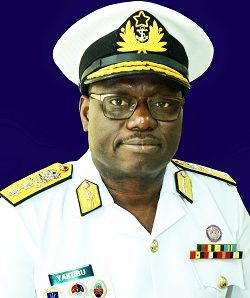 Rear Admiral Issah Yakubu enlisted into the Ghana Armed Forces in 1987. He trained at the Ghana Military Academy as part of Regular Career Course Intake 29, and was commissioned into the Ghana Navy as an Executive Officer in 1991. Subsequently, he had his International Midshipmen and International Sub-Lieutenants Courses at the Britannia Royal Naval College, Dartmouth and the School of Maritime Operations, Portsmouth both in the United Kingdom (UK), from April 1993 to April 1994 and from September 1994 to April 1995 respectively. He was adjudged the best international student on both courses.

Rear Admiral Yakubu has held various appointments during his career starting with Administrative Officer at the Naval Base Sekondi from February 1991 to October 1992 and Watch-Keeping Officer on board Ghana Navy Ships (GNS), ACHIMOTA and YOGAGA from October 1992 to June 1997 and then as Executive Officer on GNS SEBO from July 1997 to March 1999. During the period on board these three ships, he participated in the military intervention in Liberia and Sierra Leone as part of the ECOWAS Ceasefire Monitoring Group (ECOMOG).

Following that, he served as the Officer-in-Charge of the Communications School at the Basic and Leadership Training School at the Naval Base Tema, from March 1999 to April 2000 and as the Officer-in-Charge of Naval Cadet Training at the Regional Maritime Academy (now Regional Maritime University) from April 2000 to January 2001.

Afterwards, he was appointed the first Executive Officer of GNS ANZONE in January 2001 and was part of the crew that sailed the Ship from Alaska, USA, on its maiden voyage to Ghana. In September 2003, he proceeded to the United Nations Mission in Ethiopia and Eritrea (UNMEE) as a Military Observer and returned in September 2004 to assume the post of Acting Commanding Officer, Basic and Leadership Training School at the Naval Base Tema. He returned to the Fleet in June 2005 and was appointed Commanding Officer of GNS ANZONE where he served from June 2005 to June 2006. As Commanding Officer of GNS ANZONE, he was instrumental in the arrest of MV BENJAMIN, which was tracking cocaine to Ghana. He was commended for his professionalism and resourcefulness in the Report of the Georgina Woode Committee that investigated the MV BENJAMIN saga.

Rear Admiral Yakubu’s next appointment was as a Directing Staff at the Ghana Armed Forces Command and Staff College (GAFCSC), Teshie – Accra, Ghana from September 2006 to October 2008, and at the Armed Forces Command and Staff College (AFCSC), Jaji in Nigeria from October 2008 to October 2010. He returned to GAFCSC as Directing Staff in October 2010 and later appointed as the Acting Chief Instructor of the Naval Faculty from July 2011 to December 2011. He was  posted back to the Fleet and appointed Commanding Officer of Ex-German Navy Warship, which was later named GNS YAA ASANTEWAA in December 2011 and he subsequently sailed the ship as its first Commanding Officer from Germany on its maiden voyage to Ghana.

In November 2012, he was posted to the Naval Headquarters where he initially served as the Director Naval Administration till July 2015 and then as the Acting Chief Staff Officer from July 2016 to April 2017. He was promoted to the substantive rank of Commodore and appointed substantive Chief Staff Officer in May 2017. He served in that capacity till August 2019 when he was appointed Ghana’s Defence Attaché-designate to London, UK.

In the course of his career, Admiral Yakubu has been awarded for several accomplishments and also honoured with several medals including commemorative medals and those attained on International Peace Support Operations such as the ECOWAS Ceasefire Monitoring Group in Liberia (ECOMOG) and with the United Nations Mission in Ethiopia and Eritrea (UNMEE) among others.

Admiral Yakubu holds a Master of Arts Degree in International Relations from the Salve Regina University, USA and a Post-graduate Diploma in Public Administration from the Ghana Institute of Management and Public Administration. He is an avid researcher and has authored numerous papers on maritime security and strategy. He is Co-Author and Co-Editor of the official history of the Ghana Navy titled “History of the Ghana Navy: A Case for a Credible Naval Force for National Development”.